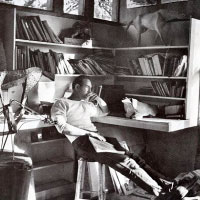 Jacques Nestlé was born in 1907 in Saarbrücken, near the Luxembourg border and died in Paris in 1991.

In 1925, he moved to Berlin where he was influenced by the Bauhaus school and avant-garde artists of the time such as Kandinsky and Paul Klee. In 1933, he could not resist the call of France and joined many artists in Paris where the revolution of modern art was already underway since the mid-nineteenth century.

Two key events will occur in Paris: On the one hand, Henri Matisse noticed his works, encourages and inspires lasting, on the other side, the merchant and art collector, Daniel-Henry Kahnweiler, wishes promote as he did with Picasso, Braque, Derain and Gris. Jacques Nestlé said that he is "neither a painter nor an artist, just a man who paints" did not follow the proposal of Kahnweiler. He lived unassuming of his art and said that his paintings made him happy.

Jacques Nestlé is the painter of colors and shapes, in this he is in the same artistic line than some of his contemporaries like Kandinsky, Mondrian and Miró. Unlike the latter, it may be noted that he uses singularly black but a vibrant black, bright and changing that structure and unifies his work. On the other hand, her bare, sometimes stylized to the extreme, where the female form are traits and colored contours reminiscent of the curves of Matisse nude or own anatomical composition bare Cubist Picasso.

Early 50s, alongside American Abstract Expressionism represented by Jackson Pollock, Jacques Nestle tends towards a more spontaneous creation, like the overwhelming desire that captures the artist at the moment of inspiration. His art then cultivates a deliberate ambiguity between figuration and abstraction and evolves into a personal form of lyrical abstraction where the artist gives free rein to direct expression, reflection of his inner emotions.

Moreover, according to Nestlé, "genius is the time when the work is manifested in a creative moment. And there it is for all time, present and future and described being seized of the urge to paint, without knowing why. "

The profound essence of his work and his influences are mixed in a Jacques Nestlé brothers in arms of Matisse, Picasso, Mondrian or Kandinsky.