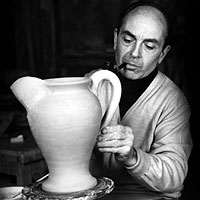 Pol Chambost, a sculptor by training, chose the 1930s to the 1980s, the earth as artistic expression.

Ceramist Paris, he explores many facets of creation, the sole object to small series. It is, as such, one of the spearheads of the Union Chamber of Ceramic Art in France. The flights of its curvilinear ceramic visions sensual, daring but also traditional, reveal an artist's passion for beautiful objects, useful and decorative.

Juxtaposition of colors, materials and uniqueness of forms, studies of traits, an association of lines and curves: all signs to recognize those icons of the French style of the 1950s.