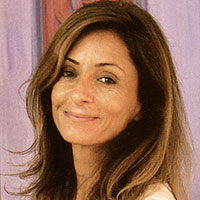 Katya Traboulsi, born in 1960, is a Lebanese artist.

Her work has been internationally collected and exhibited in many art-forums including Algerian museum of Modern Art and the international Armory Show in NYC.

Known as an artist not just a painter, her creative process embraces art in all it forms and in all media and has lead her to develop multiple art projects and publish two books: ‘of others’ (2011) and ‘Generation War’ (2013), She was commissioned by Montegrappa, to design the limited editions of the ‘Gibran Khalil Gibran’ pen as well as the ‘Calligraphy’ pen. (2015).

In the role of artist as curator Traboulsi created the critically acclaimed “Generation War” exhibit for the 2013 Beirut Art Fair and “Pictorialism” in Dubai.

She also runs the ‘Atelier’ for young talents in Dubai and Beirut since 2000.