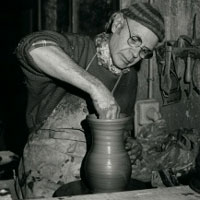 Gustave Tiffoche, born in 1930 in Saint-Nazaire, died on 25 July 2011 in Guérande (Loire-Atlantique), is a ceramist, sculptor and French painter.

In 1961 Tiffoche made his first approach to pottery at Norbert Pierlot at Ratilly. That year the Château gallery exhibits great names of world ceramics: Bernard Leach, Shoji Hamada, Raija Tuumi, A.Cumella, Daniel de Montmollin, Georges Jouve, and Mr. Y. Mohy, John and Jacqueline Lerat, De Vinck. It will make knowledge and friendship will bind during his journey with several of them.

Two years later he set up his studio in Guérande. It begins to produce unique pieces parallel to production and utility rooms built his first wood oven in 1963.

1966 saw his first participation in an exhibition of ceramics at the Hotel de Sens in Paris1 and the Culture House of Caen, "Contemporary Potter".

He organized his first solo exhibition of ceramics in 1968 in the gallery "Michel Columb" Marie-Jo Marot in Nantes. On the walls are paintings of Gaston Chaissac2. The exhibitions will follow from that time throughout France and abroad: Stuttgart in 1969, Montreal in 1970, Munich in 1971, Faienza in 1972, Dakar in 1984, Saarlouis in 1994. In parallel to the regular exhibitions Gallery "convergence" in Nantes can track changes and questions the painter.

Between 1970 and 1985, many young ceramicists came to learn or perfect their craft, or have directly collaborated with him working in his studio. Among them, we can note: Jorgen Hansen (Denmark), Miguel Bosh (Spain), Micki (Doherty) Schoessingk (UK), Jacques Foil, Pascal Castagnet, Odile Maisonneuve, Françoise Dufayard (France), Suzanne Schurch, Edward Kohler Pia Koller (Switzerland).