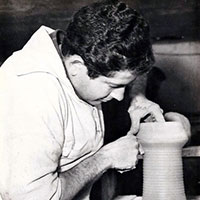 It is in the small town of Accolay that has played there more than half a century, one of the most important parts of the history of French ceramics. The potters of the community of Accolay have shaped an extraordinary way in the artistic landscape of the post-war period.

They were originally four, Andre Boutaud, Slavik Palley, Louis Dangon and called Raude, when, to escape a mandatory mobilization by the Germans, they decide to settle in this region. Very soon there are discovering the interest of the local clay which gives a quality of ceramics.

A utopian community was formed around them, headed by Alexander Kostanda. Christian Dior was in command buttons of his collections, but the arrival of whirling professionals, Elijah and Daniel Auger Barachant especially Iotshine Fedor, who blew the pottery production of Accolay. Their creativity opposed to the standards of the era was helped by a raw material enriched with lead and requiring cooking time moind a rare quality waterproof.

Unfortunetly the community did not resist to the death of Alexander Kostanda and disappeared in the 80s.